So, I went on a road trip last week to see Melanie Martinez in Memphis, and that was really exciting and wonderful and I love her dear little Cry Baby heart infinitely – but there is something else a liiiiittle more important to do in Memphis that I’ve been wanting to do since I was a zygote.

Like, DUH! You go to see the King! People – after years and years and years of begging for what seemed like a trillion times to a trillion people, the stars aligned and I finally got to go walking in Memphis and see G-R-A-C-E-L-A-N-D! BUT! More on all that later.

Now that I have gotten better about flying, I was totally willing to fly in and out of Memphis so that we would have a little bit more time to vacation. There was one small fly in the ointment of my travels, however – if I drove, I would get to go to Mississippi and Arkansas. Two previously unchartered terrains on my growing list of states that I’ve visited.

So drive we did.

In all honesty, the drive wasn’t so bad, if you like worrying about getting a DVT from lack of activity and constantly praying that a truck doesn’t bitch slap you off the interstate at any given moment. Anyway, we did the best we could to keep it real -we listened to an audiobook, I enjoyed a splitting headache that I was convinced was some sort of mini-stroke, and we ate a lot of junk food. And of course, we made a few necessary for our sanity stops along the way.

First, we stopped in Talladega, Alabama, to see the infamous Talladega Superspeedway. Infamous because the best movie of all time is Talladega Nights, not infamous because I have any sort of interest in Nascar or racing, naturally. Anyway, Ciera & I got to literally shake-n-bake AT Talladega. And it was at night time, so I guess you could say we really got to live the American dream. 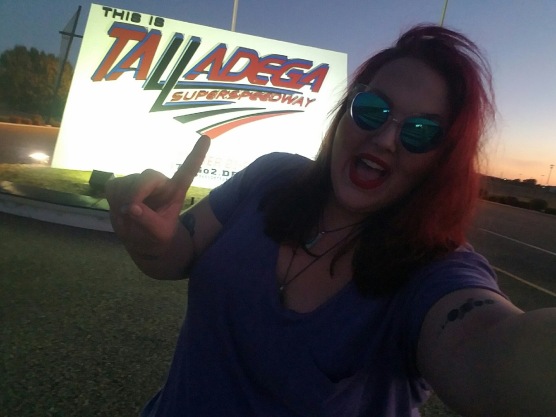 Next, we stopped off for the most delicious bubble tea and grilled cheese sandwich that I’ve EVER had in my lifetime at ThirsTea in Birmingham, Alabama – which was conveniently located at a poke stop, I’m just sayin’. Bookmark it. Thank me later. Catch lots of pokemon.

Honestly, how friggin’ cute are those emoji lids? S’cuuuuute.

The last stretch was filled with a lot of worrying about what would do if we had to poop, because the night was dark and not full of available gas stations. Thankfully we didn’t have to find out, and we finally rolled into Mississippi, which probably housed the nicest visitor center I’ve ever seen. It was dark as pitch, the sprinklers attacked us viciously – but it didn’t matter – I WAS IN MISSISSIPPI! A stranger in a foreign land! I signed the visitor’s book in the bathroom, it was all very touching.

Though I didn’t get to see much (of anything at all, really) in Mississippi, at least I can now say that I’ve been there! Hello, state number 21. Pleasure to meetcha.

We FINALLY rolled into Memphis shortly after 1 in the morning. I will forever hate myself for not buying this shirt at a gas station:

And it was around 1:30 in the morning that we pulled onto official hallowed Elvis grounds: the legendary Heartbreak Hotel (literally at the end of Lonely Street, I kid you not), where all of our adventures would begin! Starting immediately with a long snooze right underneath this sexy thing: