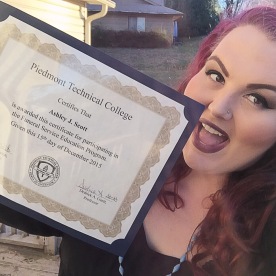 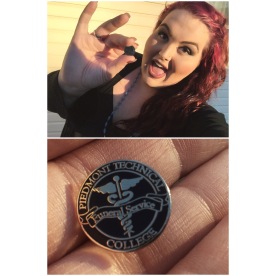 l-r: 1. My classmates, professors, and I after the ceremony. 2. My certificate. 3. My FUNERAL DIRECTOR PIN!

On Tuesday of this week, I went to the pinning ceremony at my school for the 2015 graduates of the funeral services program. As most of you know, I have never attended a graduation in my life (okay, well, kindergarten, but does that really count?) and I had little interest in breaking my own poor attendance streak by attending this ceremony. I didn’t really know what to expect from it, and didn’t really care – after all, I have recently been “burned” by the funeral industry, and it felt silly to be lauded for something that I am not currently an active part of. But my family and my friends convinced me to go, and like most everything you end up going to that you originally didn’t want to, it was completely worth it. In actuality, it turned out to be a really touching and life changing moment for me.

In October of this year, I was fired from the funeral home that I had been working at since December of 2014 – and naturally, this did not thrill me (to put it lightly). I felt angry, betrayed, used, taken advantage of, hurt –  and above all things, horrifically and terribly afraid. I wasn’t afraid of not having money – I knew I could easily find a job doing hair or, if worse came to worse, I could sign up for unemployment to get me through until whatever came next. What I was surprised to find, as the shock of everything started to wear off and I was able to take a good, clean look at my thoughts, was that the only thing that I was afraid of was never feeling as complete and as whole and as exactly where I was supposed to be in life, if this was it for me, as far as the funeral business went. I was afraid to lose what all this has meant to me, and the gift that it has given to me.

Despite how much it all has meant to me and how furiously I have fought for all of this, the whole thing has been a very sore spot in my heart for the last few months. Thinking about it, missing it, resenting the things I was forced to do and endure during my time at that mortuary, being pissed as all holy hell for what had to happen –  those kinds of things took a mental toll on me, and I started to find myself asking “Well, do I even still really want to do this?” After all, I’m a blank slate right now, a page waiting to be turned – I could keep foraging on with this funeral stuff, or I could pick up and be someone else entirely. I hated to think that way, and I hated the idea that two terrible people and one bad experience could rob me of something that means the world to me, but I also had to be honest and confront what I was feeling.

Thus, the conflict with the ceremony. Like I said, it felt silly to go to this thing and have people say nice stuff about me – me, who was fired, me, who couldn’t cut it, me, who lost everything – but I went (mostly so that my mother could finally watch me walk for SOMETHING), expecting nothing, and leaving with everything.

Since losing my job, I have thought a lot about the whole experience, and what I kept coming back to was a feeling of not being enough. This wasn’t meant to bash myself in any way, it wasn’t an exercise in self abuse by any means –  it was just an honest assessment of my worth in the funeral industry. And when it comes down to it …. I’m not worth so much. I can meet with families, I can plan and lead a funeral, I can do cosmetics and hair for the deceased – but that’s it. I can’t embalm. I can’t cremate. I can’t answer certain questions that were asked of me by families, because I didn’t have the education, experience, or know how to answer them. So, simply, the fact that there is an entire sect of this business that I am not trained in didn’t sit well with me. I am the kind of person who has an overwhelming want and need to know everything, to never be unprepared, and to be totally self reliant, and a tough look back at my time spent at the funeral home told me that if I was going to hang in, I was going to have to step it the f up.

In my quest to find “what comes next”, one of the things that I have given some thought to has been going back to school to complete the science portion of the program, IE learning to embalm. If I’m sticking around, I never again want to have to say “I don’t know” or to be the one in the room who is worth the least due to inability – but frankly, I just was not  sure if I could stomach it. In fact, I was pretty sure that I couldn’t.

The reality is this: dead people can be gross. I mean, look how disgusting the living can be. Dead people are not exempt from the gross factor of humanity. And the things that you have to do to make them presentable, well …. let’s just say, it isn’t for the faint of heart. It isn’t that I didn’t want to embalm – I want to do anything and everything that I can to strengthen my overall skill set and keep my star in this industry burning bright – I just doubted myself. I mean, I can’t even eat chicken off of a bone, let alone carve into a dead person like a Thanksgiving turkey! So I just never let myself seriously consider it as an actual option, because I was so sure that I could never do it.

Well, it turns out, yep, I think I can. In fact, I think I most certainly can. Because as I sat there with my classmates on Tuesday at that ceremony that I didn’t even want to go to in the first place and listened to the guest speaker address us and congratulate us for the life that we have chosen despite the personal and emotional hardships we constantly endure for the sake of serving those who need us – I remembered exactly how I got here and why. And I heard it as clear as day in my mind. “You’re going to do the science program. You know you have to do this.”

It was just like that. I literally thought “Aww, shit.” to myself, because it was that clear to me. There is no choice – this is what comes next. So after the ceremony, I took my little fanny over the funeral services building, toured the facilities, met with a counselor, and here we are. Gearing up for round 2.

As I told my friend Jessica, when I was filling her in on the news – this need (because it is a full fledged need, not just a want) to help these people, this insatiable drive to do ANYTHING that I can to make what they are suffering any less painful, is absolutely shocking to me. I don’t even like to talk to strangers in the checkout line at the grocery store, but by God, if their mama just died, I will hold them to my bosom and comfort them from a place I didn’t even know I was capable of. I’ve never considered myself a nurturer, never considered myself maternal, never even considered myself particularly empathetic – so I don’t get it. But I guess it isn’t really for me to get. For some reason, this is what I am supposed to do. I mean, I’m going to have to take chemistry again, for God’s sake, so if I’m willing to do that, this crap must be for real.

In a lot of ways, and as much as I hate saying it – I think my old mortuary did my a favor by firing me. Because it literally fired me UP.  Now don’t get me wrong -I still hate them with every ounce of hate in my body and still think they are insufferable megalomaniacs who deserve all they have coming to them – but everything happens in its own time and for its own reason. I almost feel like I needed the nearly full year of working in a funeral home as solely a director to get me to the point where I could become an embalmer, too. Some people can do both right out of the gate, and that’s amazing for them – but I needed to come into this on my own terms, in my own way, and at my own time. I guess it seems like if you are meant to do something, it will find you, no matter how long it takes. Mine found me at a pinning ceremony, on a day when I thought I was finished with every last bit of school forever, but, you know, whatever. It was my time.  Part of me wants to say that I would have never imagined as a kid that I would grow up and build my life around death – but another part of me can so clearly look back with fondness at my weird little behind and just say “girl, you were always bound to catch this train.” So here I go. Time to catch my train.

So that’s the tale of my magical pinning ceremony. On top of coming to a major and life altering realization, I also just got to hang out with my friends, family, and peers, and come together over this really big thing that we all did, and that felt really dang amazing. And quite frankly, if I had missed the chance to exit a graduation ceremony while “Another One Bites the Dust” by Queen played and we all laughed at the gorgeous irony of it all, I’d kick my own ass.

So, I guess I better dust off that ole Lisa Frank trapper keeper, because them school bells are about to ring a ding ding …. AGAIN. 2016, bring it. As far as I’m concerned, the only things that I can’t do are the ones that I never try.

(And as far as next year’s pinning ceremony is concerned …. well, count me in for that one, too.)

2 thoughts on “ANOTHER ONE BITES THE DUST”